CELEBRATE MAY DAY IN A BEFITTING MANNER 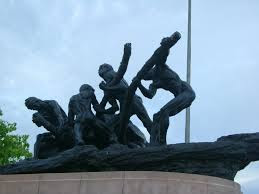 HOIST FLAGS IN FRONT OF ALL CENTRAL GOVT. OFFICES.
CONDUCT JOINT RALLIES & MEETINGS
From time immemorial relentless battles are being waged against the slavery and misery of the humanity.  The rebellious flag of Spartacus against the Roman Empire, the heroic fight of Africans for generations together in search of Freedom from slavery, the flutters of red flag to save the human values which are under deadly attack on the anvil of industrial revolution.... all are noble struggles to stop the human exploitation.  19th Century stood mute witness to the bloody human history writ with oppression and suppression to maximize the profit at the cost of human lives.  Later part of the19th Century ushered in a new creed of slavery to machines.  The madness for profits peaked and the workers were reduced to the state of machines and the worker in the factory was a mere tool to earn profit for his master.  There were no definite working hours.  There were no respect for labour.   There was no value for labourer.  It is not exaggeration to say that the smoke ridden factories sucked out the life of a labourer at the young age of mere 20 years.  This was the state of condition of workers world over.

Many dreamt a great society free from exploitation; many wished for a society of eternal source of full realization of human potential in a pleasant and healthy environment; respect for labour, equal opportunities are the hall marks of a new ideal society.  Many dedicated their lives to realize their dream society.  Many more risked their lives to realize and reach that goal.  Every defining moment, every upheaval in the history was the result of the struggles waged by progressive  minds.  These are the struggles that steered and decided the course of history of mankind.

At its national convention in Chicago, held in 1884, the Federation of Organized Trades and Labour Unions (which later became the American Federation of Labour), proclaimed that “eight hours shall constitute a legal day’s labour from and after May 1, 1886.”  Working class heroes of Hey Market embraced the hanging noose with smile on their lips.  The fight for eight-hour working day spread like a wild fire throughout the Continents.  European and Russian workers jumped into strikes and walked out of their factories.  In India for the first time Howrah Railway workers went on strike for working hours in the year 1882.  Later on Indian workers struck the work for more than 25 times on the demand of working hours between 1882 - 1890.  Eight-hour work; Eight-hour recreation; Eight-hour sleep had become the slogan of the workers worldwide.

The struggle for eight-hour work has become a stepping-stone for future architect of a new society.  The thought itself is horrifying that, had those struggles not happened and but for their sacrifices what would have been our condition in the present day society!  How degrading it would be to have no control on our own lives?  The struggle for eight-hour work challenged that de-humanizing state annihilating all the atrocities, laid a solid foundation for building a better future society.  Thus, the struggle which appears simple and of no consequence for this generation, stood as a single cause for sweeping changes in the present day society.

This May Day is the occasion for remembering reverently all the sacrifices and prepare to shoulder the responsibilities.  Still the exploitation is continuing.  Only deference is that the exploiter and exploitation has wrapped in sophistication!  The form of exploitation changed but the reason and essence remains the same.  This situation encompasses all the countries in the world.  The three decades of implementation of so called omnipotent new economic policies destroyed the economic fabric of our country.  The country became dependent on foreign powers.  Our agriculture sector doomed.  Monopoly of our farmers on their own seeds ceased.  Health and education is not within the reach of common man.  Wealth of the nation has been handed over to the private corporates for plundering.  Corporate Sector dented the jealously guarded right of 8-hour work. Now we will find casual and outsourced labour working for 12 hours a day. Technology has not ceased the drudgery of the worker.  Instead workload increased due to the ban on filling up of vacancies.  Unemployment and under-employment increased alarmingly. Central government employees are facing onslaught on their dignity by not honouring the assurance given on the minimum pay, fitment factor and allowances.  Attempts are afoot to weaken and render the unions and working class irrelevant.

As the conscious workers, employees and citizens of this country, this May Day has manifolded our responsibilities.  The silenced voice of the Chicago Martyrs should explode in reverberation in the raised fists, throats and thoughts of millions of workers.  Let’s march in unison with the inspiration of May Day!  Let’s protect our own rights and be part of that great effort to build a society of equality, justice and usher in peace and prosperity to the toiling millions of our countrymen.