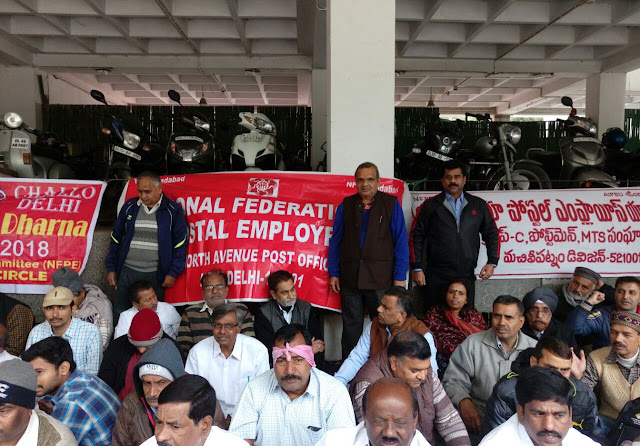 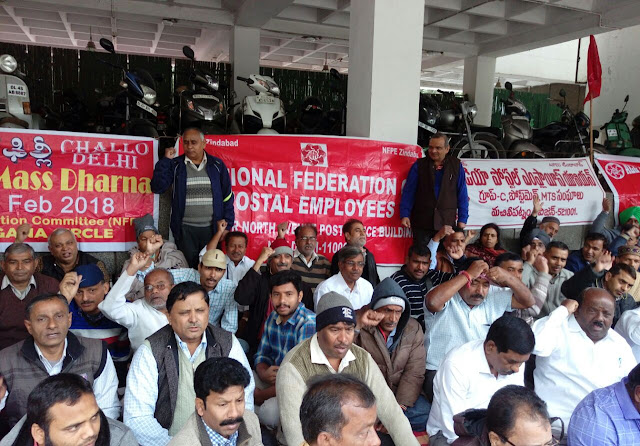 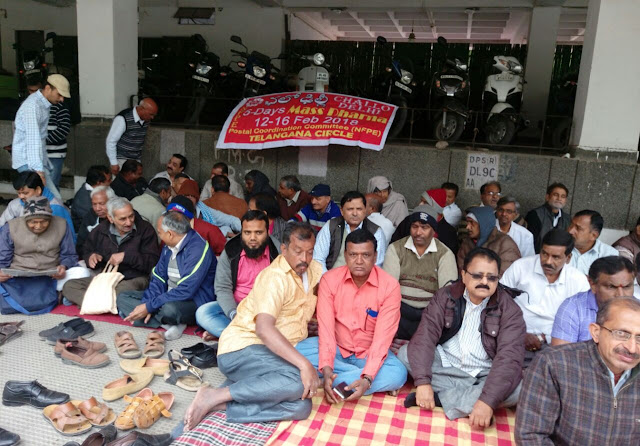 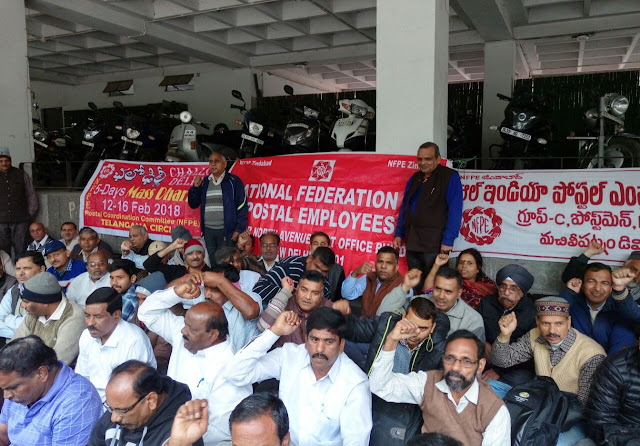 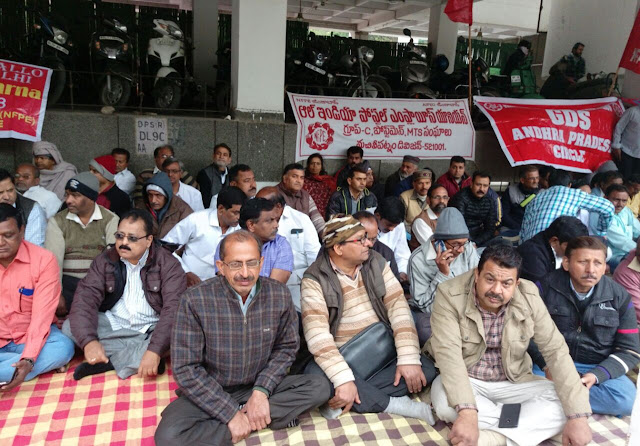 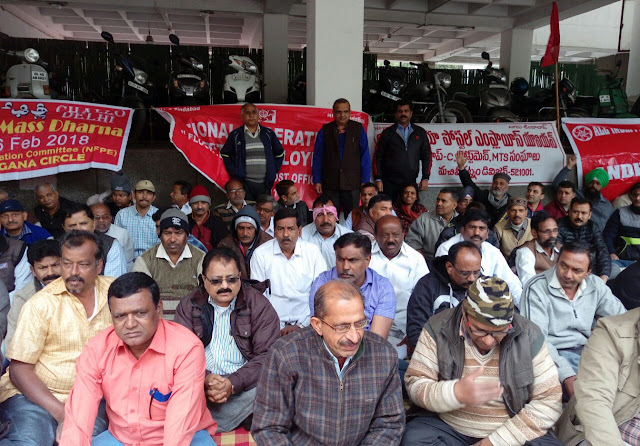 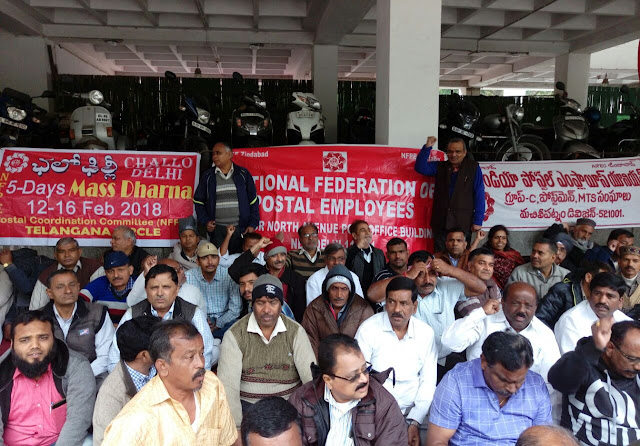 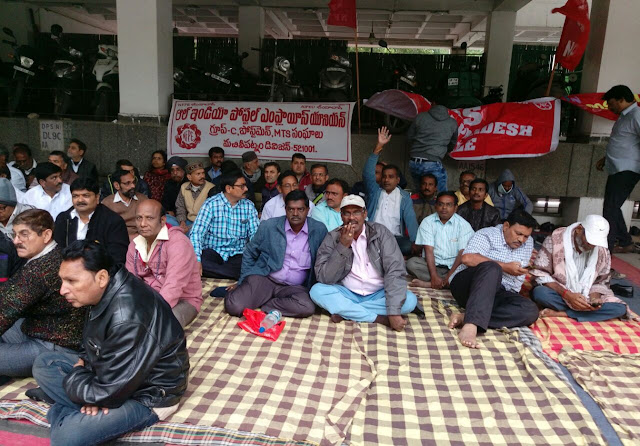 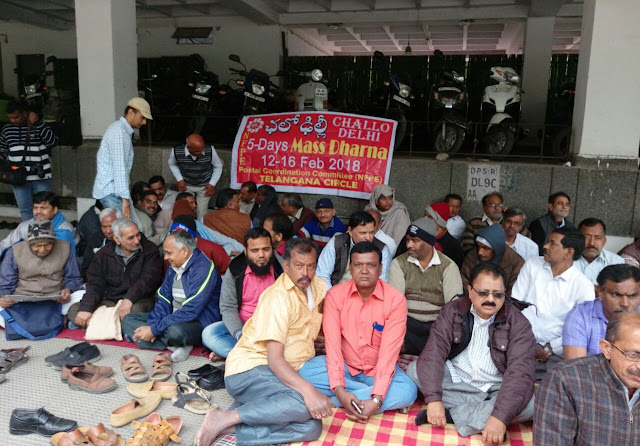 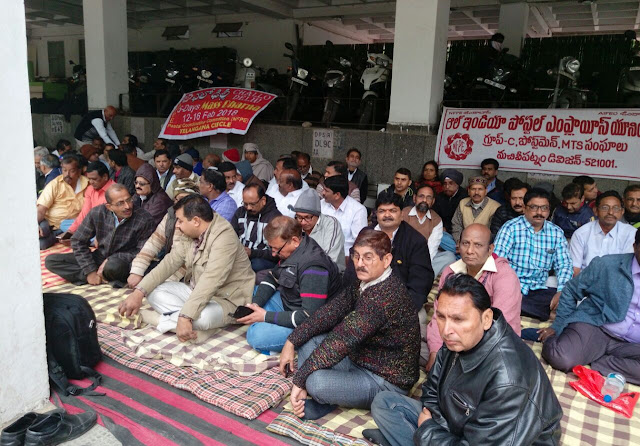 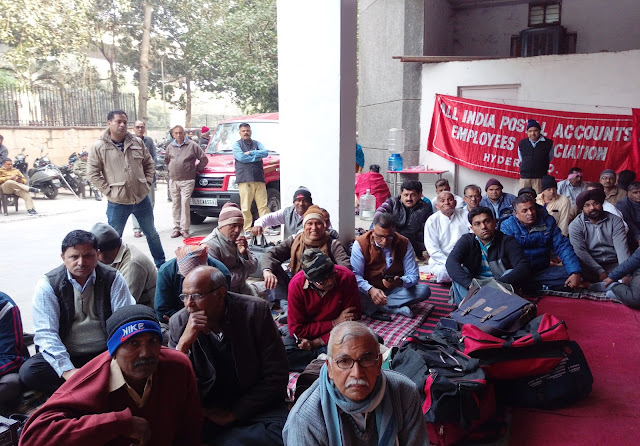 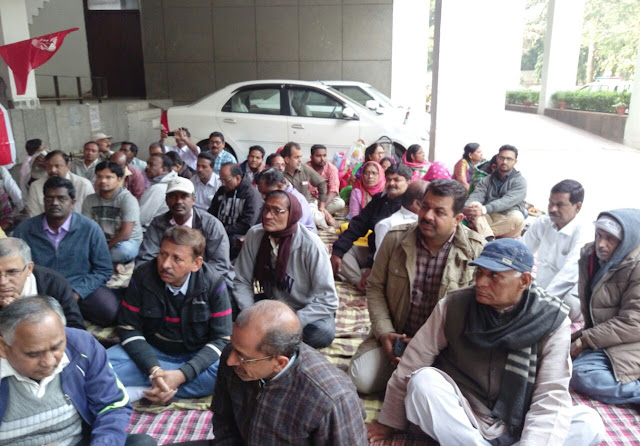 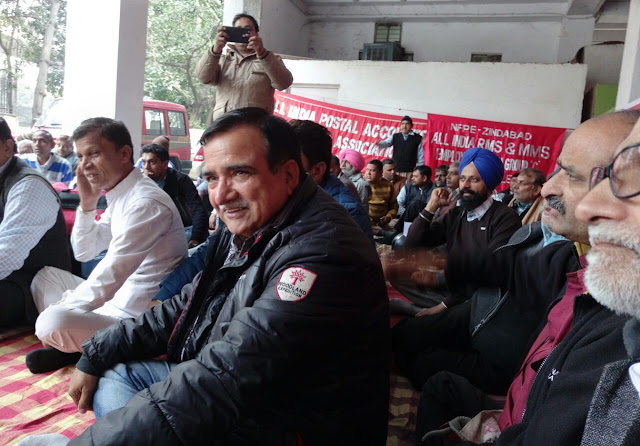 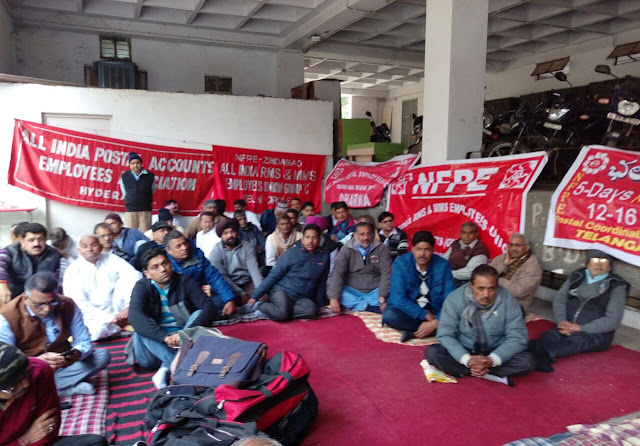 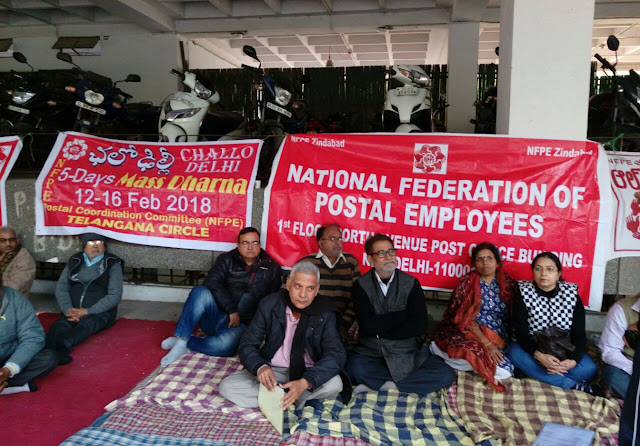 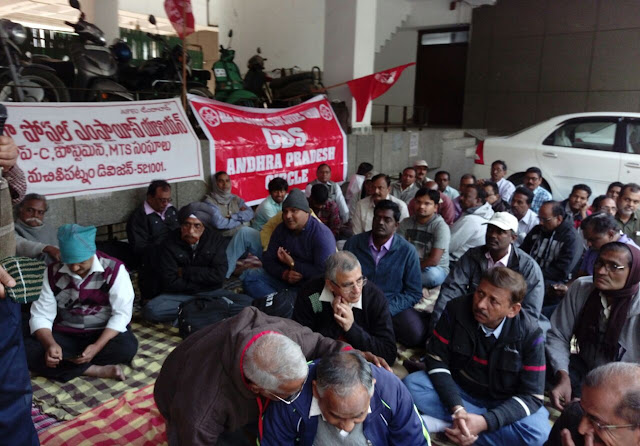 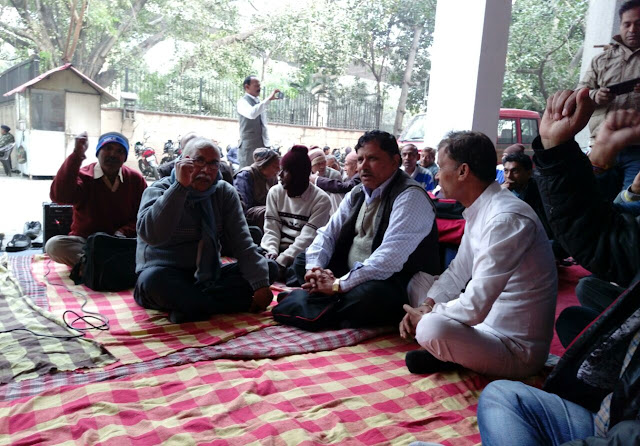 Posted by NFPE at 11:44 AM No comments: Links to this post

OUR DHARNA PROGRAMME FROM 12TH TO 16TH FEBRUARY 2018 WILL CONTINUE

NFPE
Posted by NFPE at 2:38 PM No comments: Links to this post 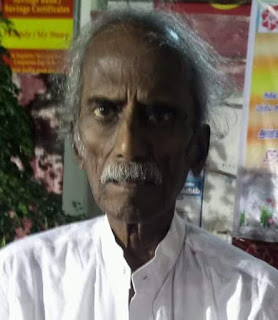 Com. A.G Pasupathy,  a veteran leader of NFPE who lead P-4 union in Tamilnadu  circle for decades, expired on 07/02/2018 in Chennai.
He was a fighter and an uncompromising leader. He was attending all programmes of NFPE despite his ill health in Tamilnadu circle.

We on behalf of NFPE, convey our heartfelt condolences on the demise of Com. A.G Pasupathy and dip our banner as a mark of respect to him. 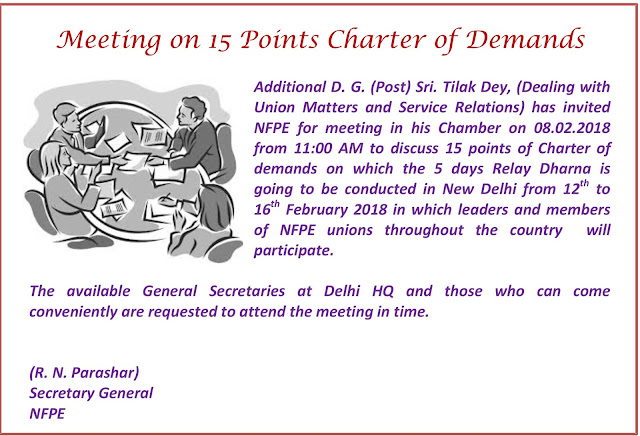 Posted by NFPE at 12:31 PM No comments: Links to this post

Posted by NFPE at 4:21 PM No comments: Links to this post 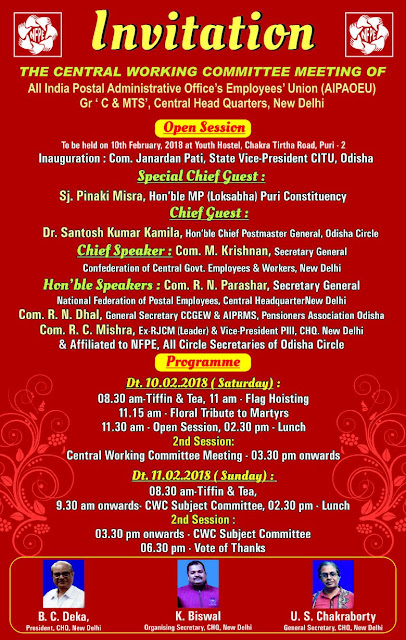 Posted by NFPE at 3:07 PM No comments: Links to this post

ALL THE ABOVE ACCOMMODATIONS ARE AT WALKABLE DISTANCE FROM THE PLACE OF DHARNA MEGDOOT BHAVAN O/o CPMG OFFICE NEW DELHI .

Posted by NFPE at 9:36 AM No comments: Links to this post

General Secretary P-3
Posted by NFPE at 9:20 AM No comments: Links to this post

R.N. Parashar
Secretary General
Posted by NFPE at 3:45 PM No comments: Links to this post

BUDGET -- NO MENTION ABOUT INCREASE IN MINIMUM PAY AND FITMENT FORMULA
We are publishing below the Budget Speech of Sri Arun Jaitley , Finance Minister and Press Statements issued by Central Trade Unions  CITU, AITUC & BMS. As far as Central Government Employees are concerned the budget  is disappointing.

The NDA Govt. budget presented by Finance Minister was more of a jugglery of words, manipulation of statistics and deceitful way of putting things to sell dreams once again without backing of concrete steps and actions needed to implement the statement of ‘intent’ made.

The Finance Minister ended with quote from Swamy Vivekanand but his budget was just opposed to what Swamy ji wanted India to emerge from as a powerful nation of working people to full fill their aspirations, and attain a life of dignity.

The budget once again gives huge concessions to the corporates and big businesses including on focus to foreign investments, and continued disinvestments of Public sector units to the tune of Rs. 80000 crores in the coming year. The Govt wants to be satisfied with certificate from International Monetary fund for the growth estimates, as the Govt once again appeared to be committed to tag India’s economy with International finance capital. Ease of Business continued to be the keyword.

Several heads were amalgamated & repeated across various projects while duplicating to show huge amounts of allocations which is far from truth. On the one hand side 100 percent FDI is being brought in animal husbandry and on the other side it is nearly lip service made in the budget to this sector & fisheries.

The Govt had failed to fulfill its election promise to raise income of farmers by one & half times and once again the lollypop is distributed on similar promise. Nothing serious emerged how to tackle agrarian crises which is accepted even by Economic Survey Report. Only grant of the loan limits are increased, from ten lakh crores to eleven lakh crores how to take farmers out of indebtedness is no where in sight. The amount announced is meager for creation of farmer markets and irrigation.

While speaking on Education, health & basic amenities it seemed the Finance Minister is addressing only the upper middle class, elites and not the vulnerable common man which constitutes more than 80% of population. Black board to digital board is talked but those who do not have black boards in schools or those who have no access to black boards are not in the agenda of government.

Some adjectives are added as usual to SC & ST population with inflated figures of four years as if it is for the year 2018 - 2019. The population figure is presented to appear as if all of them are going to hugely benefit.
The medical colleges are only the upgradation of existing ones, but are projected as if new colleges are coming out. Announcements on RSBY are made which would enhance the business of private hospitals and private insurance companies.  But public health system is not addressed, even when health care is becoming out of reach of common man.

Cess is being increased on Education & Health which will further add to indirect taxation on common man. On the other side the tax concessions to corporate and big business continued in this budget also.

70 lakh jobs were lost after demonetization and Govt. is talking of creating only 17 lakh jobs. Another six crores of people are expected to loose livelihood in informal sector according to independent surveys &
17 lakhs formal jobs to be further lost says the same survey.

Talking of railways and airways, concern and needs of vast majority of people of public transportation are not addressed, once again the FM was playing to the gallery of elites and affluents.

The budget dodged the common people who are in misery due to price rise in essential commodities and the students youth of India who want good inexpensive education in govt. sector and the employment to live with dignity.

Posted by NFPE at 12:30 PM No comments: Links to this post


Click here to view - Budget Speech
Posted by NFPE at 12:30 PM No comments: Links to this post