Com. Giriraj Singh, President NFPE and General Secretary, AIRMS & MMS Group ‘C’ attended Rafi Ahmed Kidwai National Postal Academy (RAKNPA) on invitation and had interaction with IPS probationers on 1st August 2014. He explained the role played by NFPE in the Postal Department and also replied about 30 questions raised by the IPS probationers. Details will be published later.
Posted by NFPE at 4:43 PM No comments: Links to this post

Treatment of period of Leave towards minimum residency period for in-situ promotion under Flexible Complimentary Scheme (Click the link below for details)
http://ccis.nic.in/WriteReadData/CircularPortal/D2/D02est/AB-14017_32_2013-Estt.RR-30072014.pdf

Posted by NFPE at 12:51 PM No comments: Links to this post

The National Secretariat meeting of the Confederation of Central Government Employees & Workers has given a nationwide call to observe “West Bengal Solidarity Day” on 27th August 2014 to express full support and solidarity with the struggle of the people and working class of West Bengal including Central Government employees, for restoration of democratic rights.
Trade Union movements and its workers all over West Bengal are perpetually subjected to violent attack by the hooligans abetted by the leaders of ruling party of the state. Such attacks are often accompanied by repression of state police force. Central Government Employees movement being part of Trade Union movement is also bearing the brunt of the wrath of ruling class and state administration.

In 2011 when a union backed by the ruling political party tried to capture a Union office of Confederation affiliate at Nizam Palace, Kolkata, by force, leadership of C-O-C West Bengal (State union of Confederation) rushed to the venue to protest. A few employees who are the members of parallel union, supported by hundred of outsiders of ruling party, attacked our comrades with iron rods and bamboo sticks. Secretary of Confederation affiliate, i.e; CPWD workers Union and one activist of the union suffered multiple injuries including head injuries. They had to be admitted in intensive care unit of a hospital and after untiring efforts of some doctors their lives could be saved. Four C-O-C members were also severely beaten up. General Secretary of the C-O-C was also not spared. Police framed cases against our comrades under charges of rioting, carrying deadly weapons, causing injury etc. However, with the firmness of the Union activists Union office could be retained.

Beginning with this, there have been innumerable incidents of attacks and intimidation. No strike at the call of Central Trade Unions or Confederation could be observed without violent attacks. Postal employees in the districts are worst sufferers. Employees living near post office are forcefully brought to work place by police and the cadres of ruling party. In one case after police broke open the door of a post office at Belghoria, North 24 Parganas, which was closed due to 100% strike, lady Asst. Postmaster was ordered to work. As she refused to break strike she was badly beaten up in broad day light.

Our comrades, especially Gramin Dak Sevaks in villages are compelled to leave their houses as they are supports of left forces and carrying red flags of their union. Attacks were made on the Conferences of Postal Union and Pensioners Associations in various places including Kolkata. The displaced comrades could not attend office and are forced to go on leave. Some of the GDS had to face disciplinary action for continuing on leave beyond 180 days.

Now-a-days local political leaders are intervening in administrative matters like transfer and posting etc. Many Divisional Superintendents are meekly following the orders of ruling political party leaders in this matter. Further, at the instance of such leaders, NFPE members are proceeded against in some cases as subsidiary offenders while primary accused are helped to find escape-route.

During the last two days strike at the call of Confederation, outsiders carrying flags of ruling political parties attacked striking employees at Geological Survey of India Head Quarter and Ayakar Bhawan (Income Tax office) at the heart of the city.

Recently some followers of ruling party working in Botanical survey of India office, failed to get recognition of their union as they could not muster the support of more than five percent of employees. This enraged the political leadership and the followers of one Minister of West Bengal Government who is regularly raiding the Botanical Garden at Howrah District to intimidate the employees illegally entered the Garden and torn flags of BSI Employees Associations and fixed their political party’s flag in the office premises, threatening and abusing our employees.

During the previous one day strike of Confederation and two days strike of Central Trade Unions attacks were launched by ruling party hooligans at Barrackpore, Kalyani, Contai, Tamluk and few other places where striking Postal comrades were manhandled. In Barrackpore sub Post office the Sub Postmaster was made to wear a garland of shoes and abused. The same was propagated through electronic media in order to defame not only that particular comrade but also all strikers. Comrades who are manhandled during strike cannot file police case as they were afraid of being arrested by police on false charges.

Administration especially in Postal Department taking advantage of the situation are harassing and issuing charge sheets against NFPE activists. The Appellate authorities also suo-moto review the penalties and impose severe punishments. Three comrades are awarded compulsory retirement. Those three cases were for launching demonstrations. Attempts are being made to change union by way of intimidation and threats by supporters of ruling party. Inspite of it, most of the new recruits are enrolling in our union only due to the sustained effort of our comrades. Ruling party leaders are intervening in the internal affairs of the Postal Administration to get our leaders transferred out of station. The common employees, especially lady employees are being transferred to inconvenient places and after putting them in trouble the transfer orders are reversed if the employees join unions supported by ruling party.

It is in the above background Confederation has taken a decision to extend full support and solidarity to West Bengal comrades. NFPE calls upon All India/Circle/Divisional Unions to implement the call in true spirit all over the country. Let us tell our West Bengal comrades that they are not alone and the entire Postal fraternally is with them.

Posted by NFPE at 11:09 AM No comments: Links to this post

CLEANLINESS TO BE A PART OF MDW 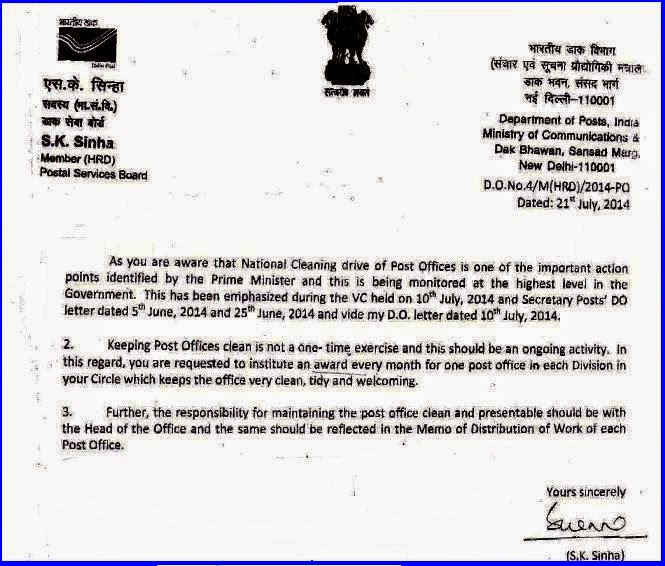