Posted by NFPE at 10:54 AM No comments: Links to this post

CLICK HERE to view Dte order
Posted by NFPE at 9:15 AM No comments: Links to this post

IMPORTANT REMINDER - THE DUTY OF THE DAY

Today (28/08/2014) is the day for Submission of Memorandumcontaining 39 demands with Demonstration in front of all offices.
Posted by NFPE at 8:33 AM No comments: Links to this post

Cadre Restructuring Committee report submitted by the official side

ORGANISE MASS DEMONSTRATION IN FRONT OF ALL OFFICES ALL OVER THE COUNTRY ON 28.08.2014.

MEMORANDUM WILL BE SUBMITTED TO GOVERNMENT AND TO DEPARTMENT OF POSTS BY JCA LEADERS (NFPE&FNPO) ON 28.08.2014 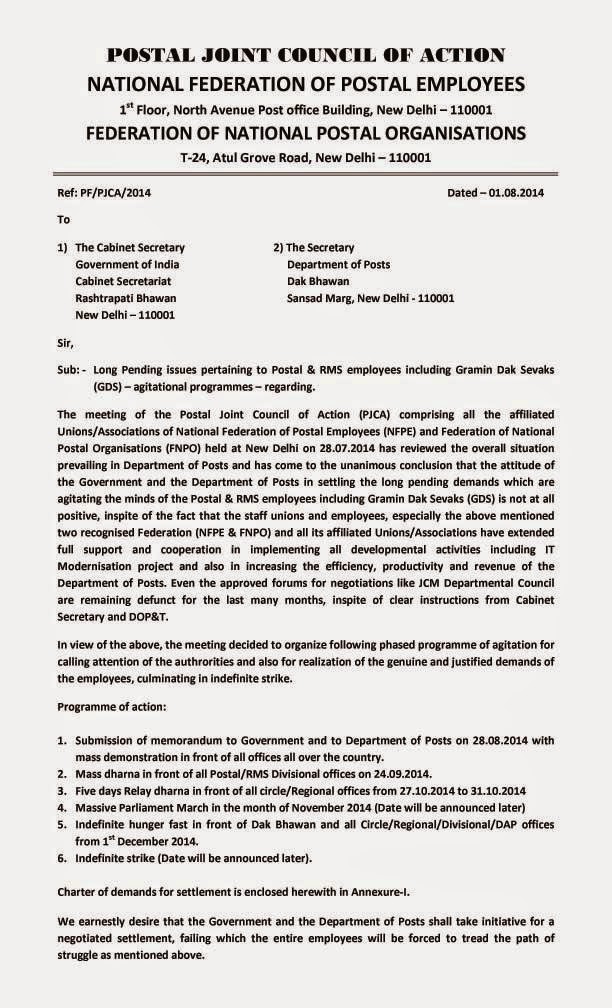 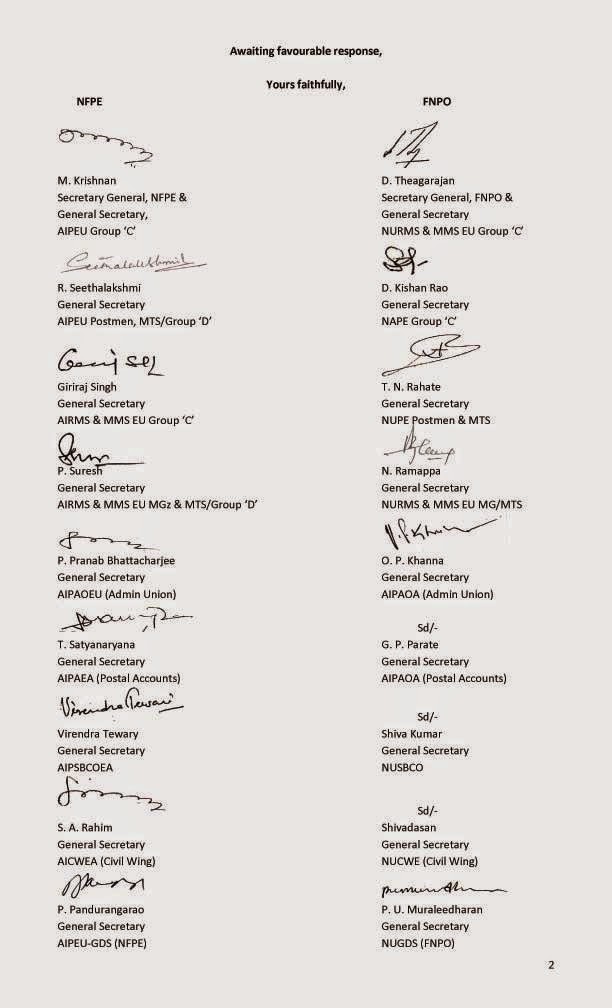 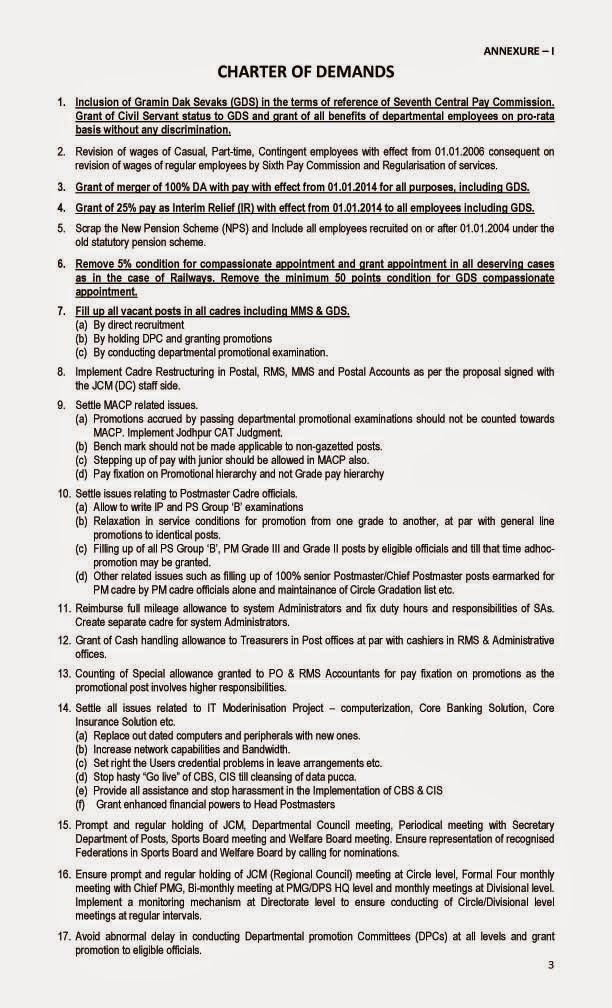 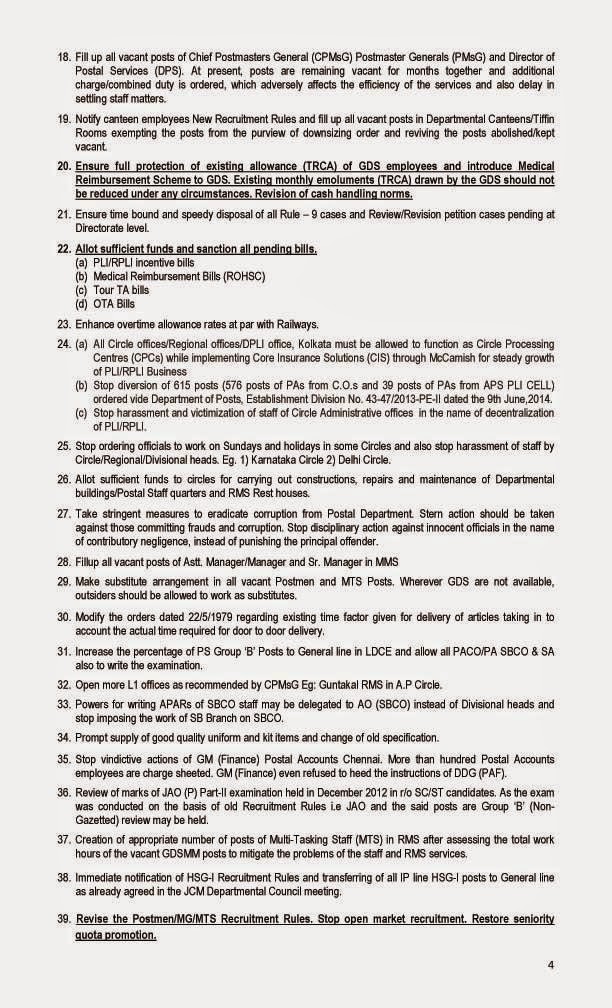 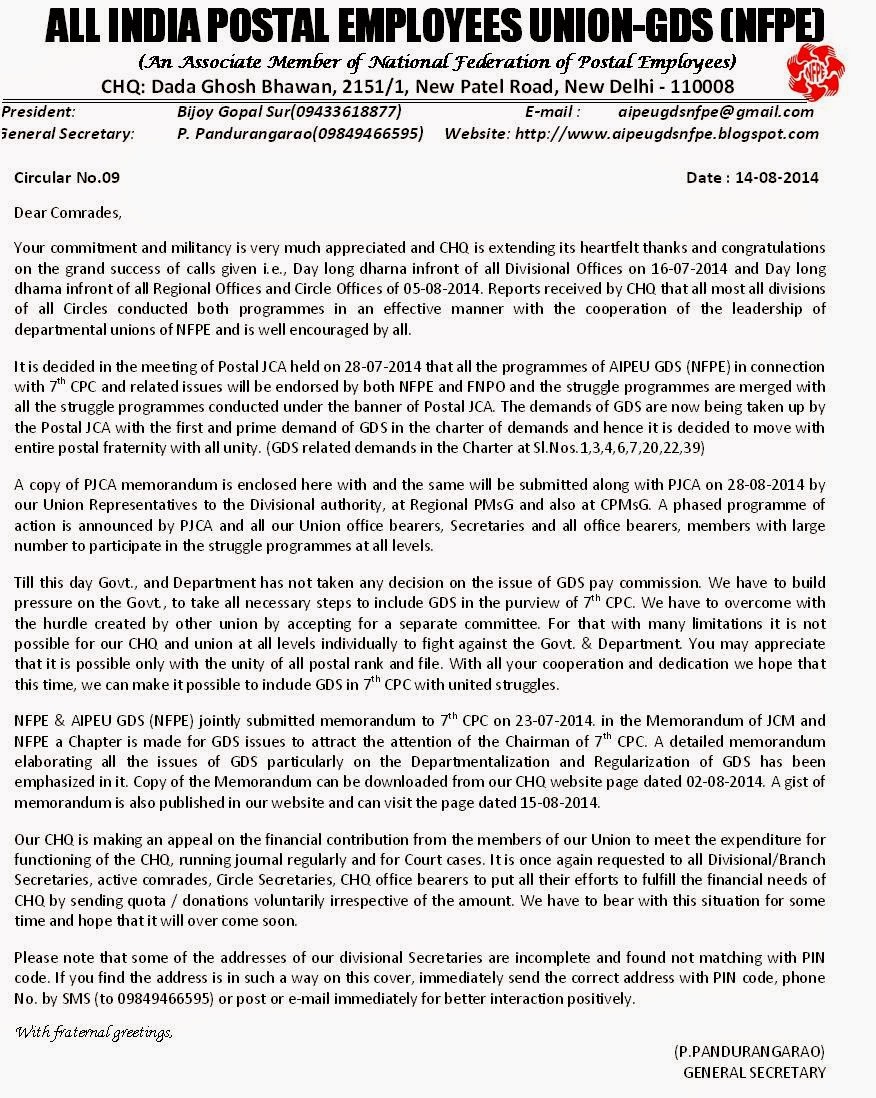 Posted by NFPE at 12:58 PM No comments: Links to this post 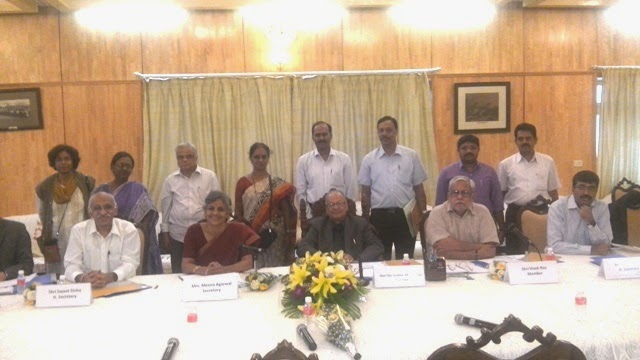 Minimum Wage:
It was brought to the notice of the commission that:
a)      Since Government is a model employer, they should provide minimum wages as per the 15 ILO conference and other wages as per the educational qualification & skill requirement of the job .
b)      Higher skill requirement due to computer usage and modernisation of equipment's. The skill requirement is higher compared to earlier days due to technology advancement.
c)      The  higher inflation which is existing from the last eight years which is effecting the Government Employees, the money value has gone down to a large extent & there is erosion in wages.
d)      The salaries of the Government Employees are fully accounted for tax calculation, whereas in private sector allowances are not taxed.
(The commission Agreed to consider this on the lines of JCM memorandum)
It was brought to the notice of the commission that to attract higher talent to Central Government higher pay scales should be given.
(The commission was of the view that people choose their career on various aspects including wages.  Wages of Government employees cannot be compared with private sector.   It was pointed out by us that though the wages cannot be compared with private sector there is a need to keep the wages in central government that people will continue in government after joining.  Chairman assured to examine this aspect)

It was brought to the notice of the commission that in respect EQUAL PAY FOR EQUAL WORK
a)      For the same post which include similar duties and responsibility, there are different pay scales/ Grade Pay existing for same nature of duties and similar recruit qualifications.
b)      Grant of Grade Pay Rs.4800 to all Supervisors cadre.
c)      The gazetted Group “B” post be  started  from Rs 5400/- GP.
d)      LDC pay scales should be provided with Grade Pay of Rs.2400 as their minimum qualifications is 12th std.
e)      There should not be any discrimination in the Pay scales of CSSS Cadre and Subordinate Departments since the nature of work being carried out by them is similar. Hence, disparity is to be removed.
f)        The Drivers of Subordinate offices  be placed with starting pay of Rs 2400/ GP as in Lok Sabha Secretariat.
g)      Graded structure for MTS should also be recommended as the 5th CPC vide para no 53.13 had recommended graded structure for these MTS.
h)      Pay scales of Stores wing persons be upgraded considering their work load and level of responsibility.
i)        Provide additional increment w.e.f. 01.01.2006 to staff working in old pay scale Rs.7450-11500 as in case of Inspectors of Central Excise and Income tax departments.
(The commission positively agreed to consider this suggestion except Drivers case.)

Increment rate of 5% and Promotion policy.
It was brought to the notice of the commission that on Increment rate of 5% and Promotion policy.
a)      As the Government employee put more and more service, he will be more trained to perform his duties in a better befitting manner. Thus the Government is more beneficial as good quality of work can be expected from an experienced official.
b)      His family responsibility will increase with age.
c)      They has to educate the children in professional courses, marriage of his children has to be performed, his medical expenses will also increase.
d)      There should be adequate financial protection for him, the better rate of increment should motivate him to work more.
e)      The person joining a Central Government Service is not just for the employment is for a whole career.
f)       On promotion one shall get two additional increments subject to an minimum salary increase of Rs 3000/- per month as he will perform higher duties and responsibility's.
g)      He shall get not less than five financial up gradations in promotional hierarchy during his service to motivate him to work more.
h)      Similarly the scientist are provided to FCS and get promotions every 4 years.
(The commission positively agreed to consider this suggestion.)

Allowances:
It was brought to the notice of the commission that on Allowances
a)      All allowances such as HRA, Tour DA, CEA (tuition fees) , Cashier Allowances, etc. should be increased by four times.
b)      OTA & Night Duty to be paid on par with Railways .
c)      When ever there is an increase in Dearness Allowance, the above  allowances be also increase as in the case of Transport allowance.
(The commission positively agreed to consider this suggestion.)

Transport allowance:
It was brought to the notice of the commission that on Transport allowance
a)      The  field oriented organizations like CGWB, Survey Of India, GSI, IBM, IMD, etc. most of the categories remain in fields, even Postal Employees and AG's Employees  are effected.
b)      Now the field going staff are deprived of earlier CCA and present Transport Allowance as they cannot fulfill the condition of at least one day stay in a month in head quarters.
c)      This condition of being present at Hqrs. Office at least a day in a calendar month becoming eligible for transport Allowances should be removed.
(The commission positively agreed to consider this suggestion.)

Taxes:
It was brought to the notice of the commission that on taxes:
a)      The  Fifth Central Pay commission in its report vide para no105.12 has said that  Dearness allowance  be paid free of net taxes as the DA is paid for compensation against price rise. All other allowances should also be paid net of taxes which has been examined by 5th CPC in para no 167.
(The commission agreed to examine this suggestion.)

Other points:
a)      Central Government Strength.
b)      Non-filling up of vacant posts has resulted in increased work load on the existing employees.
c)      Lower Spending by Central Government on its Employees.
d)      Leave / Holidays.
e)      12 days Casual Leave.
f)       Restrictions EL of  300 days to be removed.
g)      The PSU are providing reward medals after 15 years, 25 years and end of service, similarly such reward should be provided to Central Government Employees.
h)      In case of death of Government Servant during while on duties, his family members should get compassionate  appointment not considering restrictions of 5%.
i)        Education Loan should be provided.
(The commission to examine this suggestion)
Posted by NFPE at 12:57 PM No comments: Links to this post

NC JCM had raised the issue regarding payment of interim relief and merger of dearness allowance with pay , as an Agenda Item of the Standing Committee of National Council (JCM ) in its meeting held on 7th May, 2014
National Council (Staff Side)

Reg : Payment of Interim Relief and Merger of Dearness Allowance with Pay.

After detailed deliberations , it was stated by the Secretary (Expenditure), Ministry of Finance on this item that since the terms of reference enables the 7th CPC to send Interim Report , as such, the Staff Side might approach the Pay Commission for a report on Interim Relief and Merger of Dearness Allowance, as recorded in the Record Note of meeting, forwarded to Staff Side vide Director(JCA), Government of India, Ministry of Personnel, Public Grievances and Pensioners , Department of Pension and Pensioner’s Welfare ‘s letter No. 3/9/2014/JCA dt.24/7/2014.

We, therefore, humbly request you to kindly favourably consider our demand of payment of Interim Relief and Merger of Dearness Allowance with pay as Dearness Allowance, has since crossed the value of 100% on 1st January, 2014 and a number of Government Employees are superannuating every month,who would be deprived of the benefit of the same.

Yours sincerely,
sd/-
(Siva Gopal Mishra )
Secretary (Staff Side)
Posted by NFPE at 12:
Posted by Unknown at 01:13