ONE DAY STRIKE ON 15TH FEBRUARY 2017
·       AGAINST THE BREACH OF ASSURANCE AND BETRAYAL BY GROUP OF MINISTERS OF NDA GOVERNMENT.
·      TO UPHOLD THE SELF-RESPECT AND DIGNITY OF 33 LAKHS CENTRAL GOVERNMENT EMPLOYEES AND 34 LAKHS PENSIONERS.
ABOUT 15 LAKHS CENTRAL GOVERNMENT EMPLOYEES AND AUTONOMOUS BODY EMPLOYEES WILL PARTICIPATE IN THE STRIKE
v  Central Government employees and Pensioners betrayed by NDA Govt. by breach of assurance given by Group of Cabinet Ministers including Shri Rajnath Singh, Shiri Arun Jaitely and Shri Suresh Prabhu regarding increase in Minimum Pay and Fitment formula. This is the worst pay revision after 2nd CPC report in 1960. Government implemented the report without any modification suggested by Staff side (JCM). In 1960 entire employees went on five days strike.
v  Central Government Pensioners and Family Pensioners betrayed by NDA Government by not implementing Option-I (parity) recommended by 7th CPC and accepted by Cabinet.
v  Autonomous bodies employees betrayed by NDA Government by issuing instructions NOT TO IMPLEMENT 7th CPC benefits to Autonomous body employees and Pensioners UNTIL FURTHER ORDERS.
v  Three lakhs Gramin Dak Sevaks of the Postal Department betrayed by NDA Government by not extending the benefits of 7th CPC to them and also by not publishing the separate one-man committee report already submitted to the Government.
v  Thousands of Casual, Part-time, contingent employees, daily rated mazdoors and contract workers are betrayed by the NDA Government by not regularizing their services and by not revising their wages on the principle of “Equal Pay for Equal Work”.
v  7th CPC Submitted its report after 21 months on 19th November 2015. Even after 13 months the NDA Government has not implemented the revised HRA, Transport Allowance and all other Allowances. Government is deliberately delaying it further to deny implementation from 01.01.2016 and also to delay it to next Financial year 2017, thereby denying arrears.
v  Government betrayed Central Government employees and Pensioners by denying eligible 3% Dearness Allownace with effect from 01.07.2016. DA for pre-revised Minimum pay of 7000 is 7% = 490 per month. Same pre-revised pay of 7000 revised to 18000 after merger of 125% DA as on 01.01.2016. New DA granted for revised minimum pay of 18000 is 2% = 360 per month. Thus there is a recurring loss of Rs. 130/- per month in DA granted to Minimum pay. For other higher pay scales the loss is still higher.
v  In the past, only one Committee before implementation of CPC report and one Anomaly Committed after implementation was constituted. This time Committee after Committees are constituted but no negotiated settlement with the JCM (NC) staff side on any of the issue, but only one-way hearing of the views of the staff side. Implementation Committee, Empowered Committee, Allowances Committee, Pension (Option-1) Committee, Anomaly Committee, New Pension System (NPS) Committee and Senior officers Committee (?) to discuss the issues arising out of 7th CPC recommendations. (no formal orders constituting the Group of Senior Offices Committee and no terms of reference made public). Almost six months are over after Cabinet approving pay scales and one year is over after submission of 7th CPC report, but no outcome of any committee).
v  No negotiated settlement on Confederation’s 21 Point Charter of demands which includes increase in minimum pay, Fitment formula, no reduction of HRA rate, Revision of all allownaces, Restoration of abolished Advances, Option-1 for pensioners, Scrap New Pension System, Autonomous bodies wage revision, GDS Issues, Casual Labour issues, MACP promotional hierarchy and “Very good” bench mark, filling up of vacancies, removal of 5% compassionate appointment restriction, Five promotions, LDC/UDC pay upgradation, Parity in pay scales with Central Secretariat Staff, removal of CCL adverse condition, equal pay for equal work etc.
WHAT HAPPENED ON 30TH JUNE 2016 ?
AND WHO BETRAYED THE EMPLOYEES AND PENSIONERS ?
On the night of 30th June 2016, Shri Suresh Prabhu, Hon’ble Minister for Railways informed the Secretary, JCM (NC) Staff side Shri Shiv Gopal Misra that the Prime Minister had empowered three Cabinet Ministers, viz: Shri Rajnath Singh, Hon’ble Home Minister, Shri Arun Jaitely, Hon’ble Fiance Minister and Shri Suresh Prabhakar Prabhu, Hon’ble Railways Minister, to negotiate with the staff side, JCM (NC), and invited staff side (JCM) for a meeting at the Official residence of Shri Rajnath Singh, Hon’ble Home Minister on the same night 21:30 hrs. On persistent demand of the staff side (JCM), the Group of Ministers assured that the issue of increase in the Minimum wage and Fitment formula will be referred to a High Level Committee and the Committee will submit its report to the Government within four months.
NOW SIX MONTH’S ARE ALMOST OVER.
WHERE IS THE HIGH LEVEL COMMITTEE REPORT?
CHEATING……………….CHEATING………………….. CHEATING
WHEN CABINET MINISTERS BETRAY, WHAT SHALL WE DO?
STRIKE…………….STRIKE……………….. STRIKE
Strike is the only BEFITTING REPLY to those who betrayed the cause of the Central Government employees and pensioners.
We cannot go on begging before the NDA Government.
WORKERS ARE NOT BEGGARS.
Let us make the 15th February 2017 one day strike a resounding success.
Let us not surrender our prestige and self-respect before those who betrayed our cause.
Fraternally yours,
(M. Krishnan)
Secretary General
Confederation
Mob: 09447068125
Email: mkrishnan6854@gmail.com

Posted by NFPE at 12:35 PM No comments: Links to this post

No. Confdn/Strike/2016-19                                                                     Dated - 28th December 2016
To,
The Cabinet Secretary
Cabinet Secretariat
Government of India
Rashtrapati Bhawan
New Delhi – 110001
Sir,
This is to give notice that employees who are members of the affiliated organisations of the Confederation of Central Government Employees and Workers will go on one-day strike on 15th February 2017. The Charter of demands in pursuance of which the employees will embark upon the one-day strike action in enclosed.
Thanking you,
Yours faithfully,
(M. Krishnan)
Secretary General
Mob: 09447068125
Email: mkrishnan6854@gmail.com
Encl: -  Charter of Demands
CHARTER OF DEMANDS
1. Settle the demands raised by NJCA regarding modifications of 7th CPC recommendations as submitted in the memorandum to Cabinet Secretary on 10th December 2015. (See Annexure-I). Honour the assurance given by the Group of Ministers to NJCA on 30th June 2016 and 6thJuly 2016, especially increase in minimum wage and fitment factor. Grant revised HRA at the existing percentage itself i.e. 30%, 20% and 10%. Accept the proposal of the staff side regarding Transport Allowance. Settle all anomalies arising out of implementation of 7th CPC recommendations, in a time bound manner.
2. Implement option-I recommended by 7th CPC and accepted by the Government regarding parity in pension of pre-2016 pensioners, without any further delay. Settle the pension related issues raised by NJCA against item 13 of its memorandum submitted to Cabinet Secretary on 10th December 2015. (See Annexure-I).
3. Scrap PFRDA Act and New Pension System (NPS) and grant pension and Family Pension to all Central Government employees recruited after 01.01.2004, under CCS (Pension) Rules 1972.
4.   Treat Gramin Dak Sewaks of Postal department as Civil Servants, and extend all benefits like pay, pension, allowances etc. of departmental employees to GDS. Publish GDS Committee report immediately.
5. Regularise all casual, contract, part-time, contingent and Daily rated mazdoors and grant equal pay and other benefits. Revise the wages as per 7th CPC minimum pay.
6. No Downsizing, Privatisation, outsourcing and contractorisation of Government functions.
7.  Withdraw the arbitrary decision of the Government to enhance the bench mark for performance appraisal for promotion and financial upgradations under MACP from “GOOD” to VERY GOOD” and also decision to withhold annual increments in the case of those employees who are not able to meet the bench march either for MACP or for regular promotion within the first 20 years of service. Grant MACP pay fixation benefits on promotional hierarchy and not on pay-matrix hierarchy. Personnel promoted on the basis of examination should be treated as fresh entrants to the cadre for grant of MACP.
8.  Withdraw the draconian FR 56 (J) and Rule 48 of CCs (Pension) Rules 1972 which is being misused as a short cut as purity measure to punish and victimize the employees.
9.   Fill up all vacant posts including promotional posts in a time bound manner. Lift ban on creation of posts. Undertake cadre Review to access the requirement of employees and their cadre prospects. Modify recruitment rules of Group-‘C’ cadre and make recruitment on Reginal basis.
10.  Remove 5% ceiling on compassionate appointments and grant appointment in all deserving cases.
11.  Grant five promotions in the service carreer to all Central Govt. employees.
12.  Abolish and upgrade all Lower Division Clerks to Upper Division Clerks.
13.  Ensure parity in pay for all stenographers, Assistants, Ministerial Staff in subordinate offices and in all organized Accounts cadres with Central Secretariat staff by upgrading their pay scales. Grant pay scale of Drivers in Loksabha Secretariat to Drivers working in all other Central Government Departments.
14.  Reject the stipulation of 7th CPC to reduce the salary to 80% for the second year of Child Care leave and retain the existing provision.
15.  Introduce Productivity Linked bonus in all department and continue the existing bi-lateral agreement on PLB wherever it exists.
16.  Ensure cashless medical treatment to all Central Government employees & Pensioners in all recognized Government and Private hospitals.
17.  Revision of Overtime Allowance (OTA) and Night Duty Allowance (NDA) w.e.f 01.01.2016 based on 7th CPC pay scale.
18.  Revision of wages of Central Government employees in every five years.
19. Revive JCM functioning at all levels. Grant recognition to the unions/Associations under CCS (RSA) Rules 1993 within a time frame to facilitate effective JCM functioning.
20. Implementation of the Revised Pay structure in respect of employees and pensioners of autonomous bodies consequent on implementation of CCS (Revised Pay) Rules 2016 in respect of Central Government employees and pensioners w.e.f. 01.01.2016.
21. Implementation of the “equal pay for equal work” judgement of the Supreme Court in all departments of the Central Government.

Posted by NFPE at 12:34 PM No comments: Links to this post 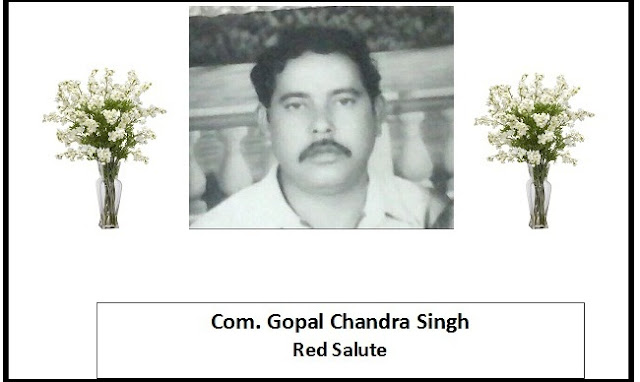 Comrade Gopal Chandra Singh, GDSMP, Maguria Town S.O. under Purulia Division , West Bengal Circle and the Divisional GDS Secretary of AIPEU-GDS (NFPE) breathed his last on 15.12.2016 in New Delhi where he came to participate in the 'Parliament March' at the call of the Confederation. He could not participate in the March as he fell sick from the previous night, reportedly from chest pain, and was taking rest at the Kalibari, where the West Bengal comrades stayed. He was brought to Ram Manohar Lohiya Hospital, New Delhi by our comrade and stayed back at kali Bari after medical treatment.
But during the day of the program, his condition worsened and he passed away at Kalibari. He was only 51, left two daughters with their mother and his own aged parents at home. His brother came to New Delhi to receive his mortal body after post mortem. He was discharging the responsibilities of the Divisional Secretary since the year 2012.
On behalf of the Confederation Com. Janardan Majumder & Com. Ajit Rana, Com. Arup Chatterjee, Com. Bibhas Dey & other leader were present there for necessary assistance & stayed there till completion of Post mortem of Com Singh. Com. M. Krishnan, Secretary General, Confederation, Com. R. N. Parashar, General Secretary, NFPE Com. Seethalakshmi, General Secretary, P4 and other all India Leaders went to Ram Manohar Lohiya Hospital to tribute last salute to Comrade Singh. Confederation, NFPE (CHQ) & Circle Unions express deepest condolence to the bereaved family for the sudden irreparable loss. We shall surely stand by the side of the family by all means in the coming days with all of your support.
Our tribute and Last Salute to Comrade Gopal Chandra Singh.