Sir,
Reference is invited to Directorate’s letter No. 01-07/2016-SPB-I of even No. dated 12.09.2016 vide which clarifications in respect of Casual Labourers with temporary status were issued. The Directorate has received references from Postal Circles seeking clarification as to whether GPF account numbers should be allotted to Temporary Status Casual Labourers covered under the Scheme formulated vide Directorate’s letter No. 45-95/87-SPB-I dated 12.04.1991.

2.         In this regard, it is clarified that Directorate’s letter No. 01-07/2016-SPB-I dated 22.07.2016 restores the provisions of the scheme as it existed prior to this Department’s letter no. 45-6/2005-SPB-I dated 02.09.2005. Since, the benefit of GPF was available to temporary status Casual Labourers prior to 02.09.2005, GPF account numbers may be allotted to such Casual Labourers for the purpose of contribution in GPF including those Temporary Status Casual Labourers who have not been regularized as yet. In this context, provisions of above said letter, dated 12.09.2016 may also be taken into consideration.
Yours faithfully,

Source: Department of Posts
Posted by NFPE at 11:38 AM No comments: Links to this post

Extension of 7th CPC benefits and grant of Dearness Relief to Pensioners of Autonomous/Statutory bodies under Administrative Control of Department of Commerce. 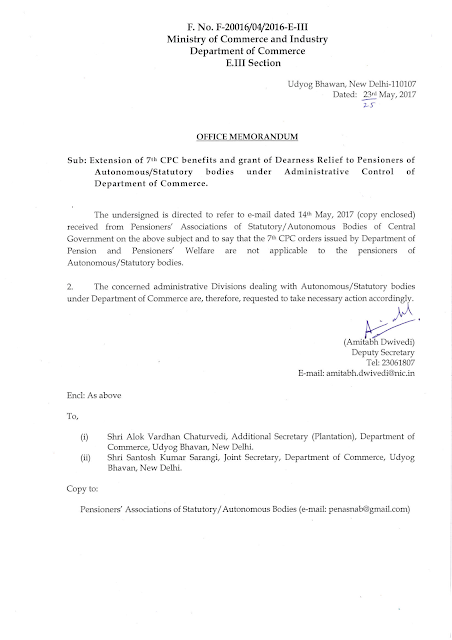 Posted by NFPE at 10:59 AM No comments: Links to this post

REMUNERATION TO BE PAID TO THE GRAMIN DAK SEVAKS ENGAGED AS SUBSTITUTES IN SHORT-TERM VACANCIES OF POSTMEN, MAILGAURD AND MTS.

To,
The Secretary
Department of Posts
Dak Bhawan,
New Delhi – 110001
Sub: -  Remuneration to be paid to the GraminDakSevaks engaged as substitutes in short-term vacancies of Postmen, Mailgaurd and MTS.

Para – 3 – “In future, GDS who are willing to work as substitute will be paid at the minimum pay of the respective levels of the Pay Matrix barring other allowances like HRA, Transport Allowance etc. with effect from 01.01.2016.”

It is requested to issue necessary clarification removing the ambiguity appearing in para- 3 of the OM.
Yours faithfully,

All General Secretaries/Circle Secretaries of NFPE Unions
Posted by NFPE at 4:38 PM No comments: Links to this post