One Day Strike On 21/04/2016 In Maharastra Circle - A Protest Against The Miseries Caused By Finacle And McCamish.

Our Friends of Maharastra Circle are going on a one day strike on 21/04/2016. The reason for the strike is the miseries caused by Finacle and McCamish for the past one year.
Read what union leaders say about this issue.
Respected all postal employees of MH circle,

As per order received from AIPEU union Circle headquarter, Mumbai in the connection of ONE DAY STRIKE in Maharashtra circle on 21st April 2016 on issue of Finacle and McCamish. Com. we have been facing the issue of Finacle and McCamish since a year and still continue. Our unions have taken up the issue with our administration but nothing constructive happened till now. So it is time to stand against the injustice and serve the justice to the postal employees.
The situation of strike has arisen due to constant neglect of the demands of the association by the management. Our demands of the smooth working of Finacle and McCamish were not taken seriously by the senior authorities in the organization forcing us to take the extreme step like strike and bandh. Finacle and McCamish are not working properly since long and it becomes the moral responsibility of the management to look into the issues and address the grievances of the workers.
The authorities have failed in this matter of urgent importance.
Therefore last but not least administration is for the employee, employee not of the administration. So humble appeal to all postal employees and all com. of AIPEU unions Maharashtra circle stand up against the administration and participate with us shoulder to shoulder. Fight against the injustice.
Lal salam ! Lal salam ! Lal salam!
Read the charter of demands below. 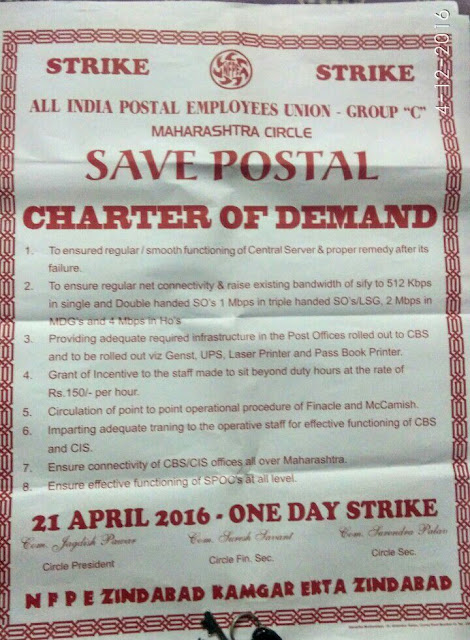 ASSAM CIRCLE EXTEND SOLIDARITY SUPPORT TO THE NFPE COMRADES OF MAHARASTRA CIRCLE.
Posted by Unknown at 23:12