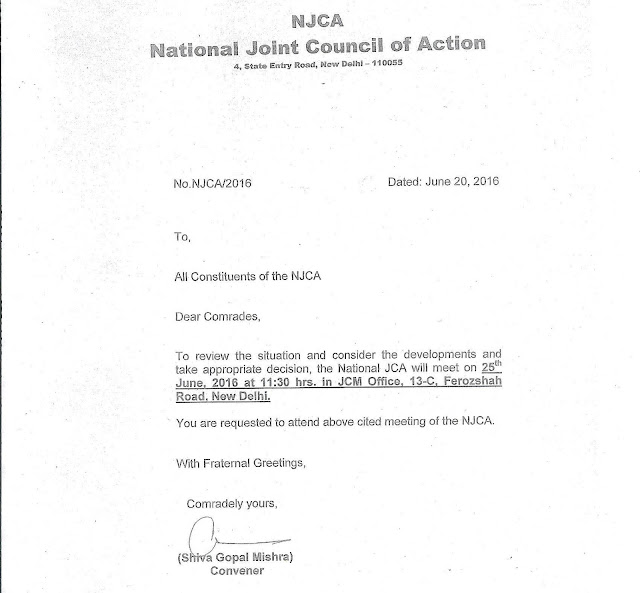 Respected Sir/Madam,
Sub: Non-settlement of genuine demands of the Central Government Employees
More than 32 lakh Central Government Employees working in various ministries of the Government of India. including Railways, Postal, Defence (Ordinance Factory and other Civilian Employees), Central Secretariat, Income Tax, Audit & Accounts and other employees of the government departments are aggrieved since long on non-settlement of their various demands.
The report Of the Vll CPC has further made them aggrieved because of the retrograde recommendations, including non-scientific calculation of Minimum Wage and Fitment Formula. The issue of National Pension Scheme (NPS) had been very heartburning for more than 1.1 million young Central Government Employees who have been deprived from the Defined Pension/Family Pension and we are agitating this issue with the Central Government since its inception.
Under the above compelled circumstances, the National Joint Council of Action has taken a decision to go on“‘Indefinite Strike” from 06:00 a.m. on 11th July. 2016
The Central Government Employees of this country have always stood for the development and good governance of the country. but do feel de-motivated because of the inaction on their pending demands. we do have written to Hon’ble Prime Minister of India vide letter No.NC/JCW2016/CS/PM dated 14.06.2016 (copy enclosed for ready reference) the request that. the government should immediately come forward for negotiated settlement with the NC/JCM on the demands of the Central Government Employees to avoid unnecessary confrontation.
We earnestly hope that. you will kindly lay your hands and support us in our struggle as well as put pressure on the Government of India far resolution of our genuine demands at an earliest
Yours faithfully, 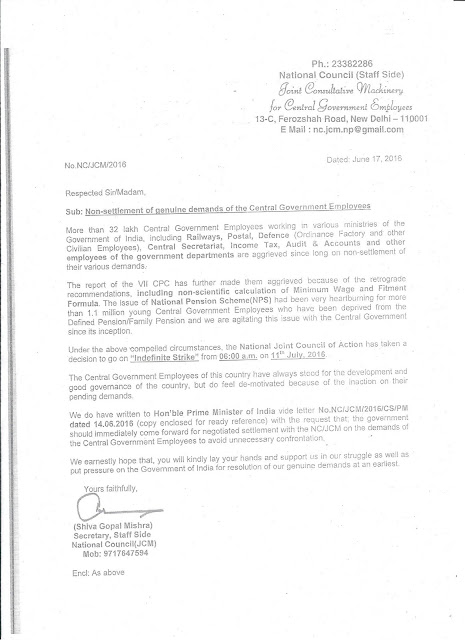 Posted by NFPE at 5:12 PM No comments: Links to this post

MAKE IT A GRAND SUCCESS

All Affiliates and C-O-Cs are requested to ensure maximum participation especially from Delhi and nearby states.

The National Joint Council of Action was formed as an apex level organization of the under-mentioned   Associations/Federations participating in the negotiating body of the Central Government employees at the National level, called the Joint Consultative Machinery.

It was formed in the wake of the then UPA Government refusing to enter into any meaningful negotiations with the Employees Federation.  In the face of the unprecedented rise in the inflation of the Indian Economy during 2006 -16, the employees demanded the Government to effect wage rise for the emoluments fixed on the basis of the 6thCPC was incapable of meeting the both end of an employee especially at the lowest level.  Though under threat the then Government conceded the demand for setting up of the 7th CPC, they stubbornly refused to grant any interim relief or DA merger, which alone would have mitigated the difficulties of the low paid workers  When the NDA Government came to power, the NJCA approached them also with a request that the difficulties of the  low paid workers in Central Government must be appreciated and the demand for Interim Relief or DA merger be conceded.  The NDA Government too did not respond to the plea made by the NJCA.

The 7th CPC which was set up in Feb. 2014 was to submit its report in August, 2016.  However, at the intervention of the Government, the report was further delayed and it ultimately reached the Government only in November, 2015.  Their recommendations were to be effective from 1.1.2016.  Except setting up an empowered Committee of Secretaries, the Government did not do anything so far on the report.  It is now more than six months the report is with the Government. Normally the  revised allowances which form part and parcel of the salary of the employees are granted with prospective effect i.e. from the date of the issue of the orders.  The delay in taking decision on the report will rob the employees of the increased allowances for ever.   This apart, the report of the 7thCPC was totally disappointing as it did not address any of the issues projected before them in a proper manner and most of the demands were rejected sans reasoning and logic.  The increase they recommended was a paltry 14%, the lowest any Pay Commission had ever suggested.  The NJCA in a detailed memorandum submitted on 10th December, 2015,  conveyed to the Government as to how the recommendations on all major issues were bereft of logic and reasoning and suggested as to what improvements were required thereon.  The NJCA had been pursuing to have a meaningful negotiation and settlement of the issues.  Except hearing the leaders, the empowered Committee did not go further. It acted as if it was powerless and the final decision will have to be taken by the Government.  At the request of the Cabinet Secretary on Ist March, 2016, when the NJCA deferred the strike action which was to commence in April, 2016.

As there had been no fruitful negotiations or discussions and having realized that the Government has no intention to settle the Charter of demands, the NJCA decided to serve the notice for an Indefinite strike action on 9thJune, 2016.  Accordingly, all the constituent organizations have served the strike notice today to their respective heads of Departments.  The indefinite strike will commence on 11th July, 2016, if no satisfactory settlement is brought about on the charter of demands (which is enclosed).

About 35 lakh workers and employees belonging to various Departments of the Government of India will participate in the strike action, which is to commence on11th July, 2016.  It will certainly be the largest participated strike action of the Central Civil Servants of the country since its independence. The determination of the Minimum wage on the basis of Dr. Aykhroyd formula enunciated in 1957 to which the Government of India was a party is the most significant issue in the charter of demands.   A right settlement thereon will have far reaching impact in the wage determination of the entire working class in the country.   The confrontation is between the forces who wanted India to be the destination for cheap labour and others who fight against the exploitation.

The new Contributory Pension scheme introduced by the Government in 2004 has made one third of the Civil servants unsure of their entitlement at the evening of their life even though they were  to contribute huge sums from their wages every month compulsorily.  The PFRDA bill became an Act in the country as the members of Parliament both belonging to NDA and UPA voted in favour of the loot of the workers.  Even the recommendation made by the Standing Committee of the Parliament to provide for a minimum guaranteed annuity pension was rejected when the Bill was passed.  The other issue which must have a satisfactory settlement in the charter of demands is about the contributory pension scheme.

There was perhaps only one and only one positive recommendation made by the 7th CPC. That was to give some relief in the pension entitlement of the past pensioners.  The Government has now proposed to reject that recommendation on the specious plea that the relevant records required for the verification of the claim of the individual pensioners especially those retired long time back may not be available with the Government.  If the Government chooses to accept such also untenable advices from whichever quarter it emanates,  it would not only be unfortunate but will make the strike action an imminent inevitability.  While the NJCA hopes that the good counsel will prevail upon the Government to avert the strike action, it appeals all its constituents and through them all Central Government employees to go ahead with the preparation of the strike action, which is slated to commence from 11thJuly, 2016 with courage and determination.
Shiva Gopal Misra.
Convener
CHARTER OF DEMANDS
Part A.

1.    Settle the issues raised by the NJCA on the recommendations of the 7 CPC sent to Cabinet Secretary vide letter dated 10th December 2015.
2.    Remove the injustice done in the assignment of pay scales to technical/safety categories etc. in Railways& Defence, different categories in other Central Govt establishments by the 7 CPC.
3.    Scrap the PFRDA Act and NPS and grant Pension/family Pension to all CG employees under CCS (Pension) Rules, 1972 & Railways Pension Rules, 1993.
4.    i) No privatization/outsourcing/contractorisation of governmental functions.
ii) Treat GDS as Civil Servants and extend proportional benefit on pension and allowances to the GDS.
5.    No FDI in Railways & Defence; No corporatization of Defence Production Units and Postal Department.
6.    Fill up all vacant posts in the government departments, lift the ban on creation of posts; regularize the casual/contract workers.
7.    Remove ceiling on compassionate ground appointments.
8.    Extend the benefit of Bonus Act,1965 amendment on enhancement of payment ceiling to the adhoc Bonus/PLB of Central Government employees with effect from the Financial year 2014-15.
9.    Ensure Five promotions in the service career of an employee.
10.  Do not amend Labour Laws in the name of Labour Reforms which will take away the existing benefits to the workers.
11.  Revive JCM functioning at all levels.

Posted by NFPE at 3:02 PM No comments: Links to this post